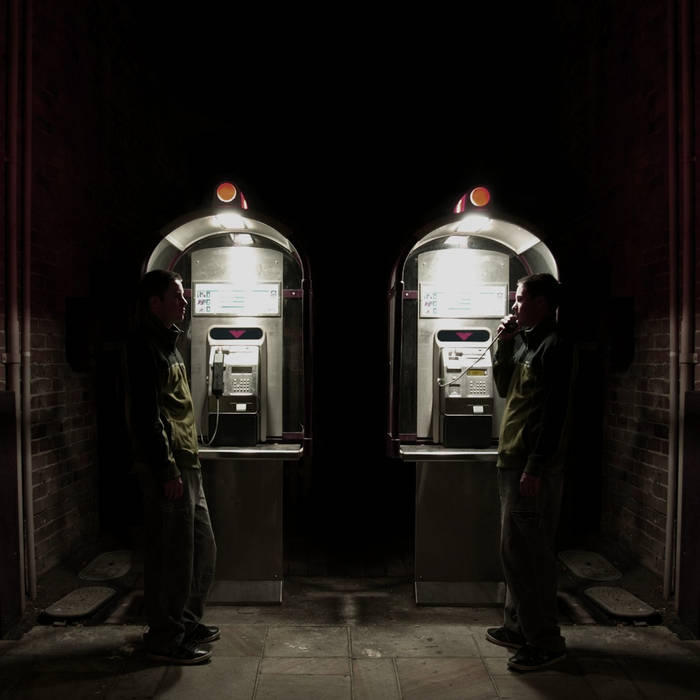 Unidentified male, 20 years old, frustrated in the lack of direction and meaning in his life leads to his searching for what he believes is missing. Confused by his shyness and naivety, he finally meets a girl on the internet, and shortly afterward leaves to be with her. After a romantic date on a houseboat, he gives his lady a silver pendant, and, disguising the emotion, steps outside for some air. In some sort of freak accident/ misjudgment he disappears off the edge of the boat and is not seen again. Police helicopters circle, failing to detect anything. The dreadful news is duly delivered to his distraught family.

Floating aimlessly in the inky-black amnionic fluids that surround him, he is roused by the itch of sand on the back of his head. Battered and sore, he struggles to his feet. Unaware of his whereabouts, his name, his life, he slumps and begins to make his way toward the lights in the distance. Taking shelter in an abandoned wreck of a house, he is alerted to the fact he is not alone. He has stumbled into a drug den, operated by a dealer known only as 'The Doctor'. A real bastard. With no other option beckoning, our man relents and falls into a rut of supplying and using to exist. Supply and Demand? Flying and falling. Barely aware of either.

When he collapses in a busy street some time later, people walk by, unmoved. Another degenerate who’d OD'd. They'd seen it all before. Someone eventually calls the emergency services. They arrive at the hospital as he's drifting in and out of consciousness. Duly assessed and processed by the casualty nurses, he's dispatched to a bed where he remains in a semi comatose state for a few days.

As the days roll by more and more faculties return, and he is drawn to a pendant worn around the neck of one of the junior nurses. A similar one to the one he'd given to his lady a few years previously. A rush of confusion is followed by a single positive recollection. The first exploration into the hitherto concealed vault of memories. The experience gives way to an exhaustive torrent of repressed experience, and the battle between the two selves begins.

Racked with guilt over his decline, but buoyed with optimism for a return, he struggles with the ghosts and corpses he has left along the way. But worlds away, a woman puts the faded photograph back on the table. The phone has been ringing again. All of this never happened. The ringing simply served to remind her of the moment she found out her brother had drowned. What if he hadn't gone? What if?

230503 was a concept piece that examined the effect of loss and grief, and was loosely based on the accidental drowning of a close friend of David and Robert.

The music was mostly written by Robert Moulding and David Eaton from mid 2004 through to early 2006. The album took close to five years to complete. It was further arranged and mostly recorded by the initial line-up of Robert, David, Steven, Doug and from early 2007, Nick. With Dean Bennison producing and making some key guitar and vocal contributions, he joined the band officially in time for the official release of the album.

230503 was released independently on October 19th 2009. A full scale digital release followed worldwide from April 2010, and the album went on to sell unexpected numbers all over Europe, South America and Japan.

The band performed the piece live in April and May 2010 to general acclaim, performing the final full rendition of it at The Annandale in Sydney on May 15th 2010.

The album could best described as a continuous piece of music, split into ten separate ‘movements’. Featuring much of what a progressive rock fan comes to expect- layered, lyrical musical passages; stark, exposed acoustic passages; ballsy agitated rockers; experimental soundscapes; electronica; musique concrete and world music; tempered with multiple time signatures and anything up to six part vocal harmonies. All culminating in the album's all-but 18 minute centrepiece, Disinfected and Abused.

As a journey, the album is both melancholic and uplifting, soothing and occasionally downright frightening. It encompasses a gamut of moods and colours, but is buoyed with a real, genuine emotion that is perhaps, hopefully, the reason why the album seemingly resonated deeply with people.